Home / Campus News / ‘Whose Culture Has Capital?’ Jan. 27 talk to focus on the role of economic background in student decisions, success

Shonda Goward says the aspects of life that make a person stand out are the ones that are going to contribute the most to that person’s success.

That includes the challenges. Goward, director of academic success for UNC-Chapel Hill’s Carolina Covenant program, had an early background including limited financial resources and several jobs throughout her undergraduate education at UNC-Chapel Hill. After receiving her bachelor’s degree in journalism, she went on to receive her master’s degree from Southern Connecticut State University and her doctoral degree in higher education administration from George Washington University.

“I learned so many things about success from growing up without,” she adds. “My mom persevered through everything. Instead of hiding that I grew up with limited income, I see these experiences as valuable.”

More information on the talk and Dr. Goward 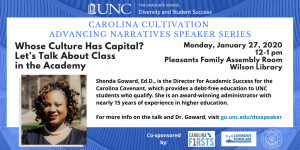 Goward, a higher education administrator for more than 10 years, says researchers are still seeking consensus on the meaning of socioeconomic class. Colleges and universities have not yet “started the conversation” on how income influences individual decisions about higher education — and the success of students in college.

She will discuss current research on low-income student success and her own educational journey at noon Jan. 27 at the Pleasants Family Assembly Room in Wilson Library. Goward’s talk, titled “Whose Culture Has Capital? Let’s Talk About Class in the Academy,” is sponsored by The Graduate School’s Diversity and Student Success (DSS) program. Co-sponsors are the Carolina Firsts, Lookout Scholars and Carolina Covenant programs.

The event is free to the public.

“Undergraduate and graduate students who come from lower socioeconomic backgrounds often have additional barriers to navigate while trying to complete their degrees,” says Maria Erb, co-director of DSS. “Having to hold multiple jobs to pay for the rent and food while balancing academics, not being able to attend a professional conference to advance one’s career because of lack of additional funds, and more, contribute to the daily stressors that students face.”

The Carolina Covenant guarantees admitted undergraduate students within families with adjusted gross income at or below 200% of federal poverty guidelines that they can graduate debt-free. The groundbreaking program, implemented in 2004, is estimated to now support more than one in 10 undergraduate students at Carolina.

“UNC-Chapel Hill has room to lead in the conversation about social class in higher education. When you face it and start talking about it, people respect it,” Goward says.