In this time of the COVID-19 pandemic, January 2020 can seem as distant as a faraway galaxy. For UNC-Chapel Hill doctoral student Derrick Carr, whose research focuses on galaxies, the month is a vivid memory: Carr traveled to the 235th meeting of the American Astronomical Society in January, where he received honorable mention in the prestigious Chambliss Astronomy Achievement Student Award poster presentation competition.

Nine out of the 125 graduate students who presented their research won the award or received honorable mention in the graduate-level competition. Since then, Carr has received the 2020 Schrager-York Foundation Summer Research Fellowship from The Graduate School at UNC-Chapel Hill and was named a 2020-21 NC Space Grant Graduate Research Fellow.

Carr’s research focuses on how galaxies known as blue nuggets form, generate stars and evolve into a later stage known as red nuggets.

“Everyone knows the Milky Way is a beautiful spiral galaxy,” he says. “The galaxies I study are small, thought to be typically far away, and often get neglected. In fact, nuggets got their name because when they first discovered them, researchers were searching through existing databases to find more of these rare systems, similar to as if they were panning a riverbed for rare gold nuggets.”

Carr works within the UNC-Chapel Hill-led RESOLVE survey, an international research collaboration believed to be the first to confirm that blue nuggets also exist much closer to our own galaxy than previously thought. Sheila Kannappan, associate professor of physics and astronomy, is RESOLVE’s principal investigator and Carr’s academic adviser. 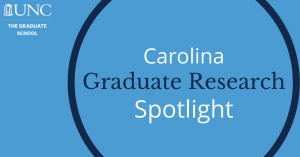 “This unique survey is enabling Derrick to produce the first complete inventory of ‘nuggets,’ unusually compact galaxies that form where there is an intense confluence of gas in the Universe,” she says.

“This research will ultimately shed light on how nugget formation is tied to the broader evolution of galaxies over cosmic time: Nuggets were first identified in the distant or early Universe, but Derrick’s nearby sample is allowing us to study present-day nugget formation in close-up detail.”

Carr’s interest in astronomy extends to his childhood, looking up at a New York night sky in which stars and other objects were sometimes difficult to see. At UNC-Chapel Hill, he has worked remotely with theoretical astrophysicists in Australia and the United Kingdom, and is making important contributions toward identifying characteristics of galaxies very different from our own.

“I just really enjoy being able to study galaxies in general,” he says. “I find it so fascinating that we can study and learn so much about these massive systems that are millions of light-years away by just looking at them.” Derrick Carr, a doctoral student in physics, received his bachelor’s degree in astrophysics, with a minor in Japanese, from Haverford College. He shares his thoughts on the study of the Universe’s mysteries and the rewarding aspects of his research:

“I think studying the mysteries of the Universe can teach us a lot about life on Earth. Humans are curious – we always want to learn more and study whatever we can. This includes everything from the smallest of particles to the largest objects known to man. In order to have that cohesive understanding of life on Earth, we may want to learn more about the Earth and how it formed. That, in turn, leads to questions of how the solar system formed, and then how our galaxy formed and so on and so on.

My research focuses on how galaxies form and evolve. Having a clear picture of how a galaxy ‘works’ will then translate into some clarity of how constituent parts of galaxies ‘work,’ such as stars, planets, and even life on planets. I think ultimately the goal of scientists is to understand how all of the pieces of the Universe operate and how they all tie into one another.”