Charles Weiss, PhD, professor emeritus of environmental sciences and engineering at the UNC Gillings School of Global Public Health, passed away on Dec. 17. A resident of Carol Woods, in Chapel Hill, N.C., he had celebrated his 100th birthday with a party on Dec. 8.

Born Dec. 7, 1918, Weiss grew up in Newark, N.J., benefiting from his family’s easy access to New York City’s cultural and educational opportunities by becoming an early devotee of music and travel. His Dec. 8 party included a concert by the Chamber Orchestra of the Triangle, whose work he enjoyed, featuring compositions by Verdi, Rossini and Mozart.

After World War II, he earned a doctorate in sanitary engineering at Johns Hopkins University and worked at an organization that was the precursor to the Environmental Protection Agency. He joined the UNC-Chapel Hill faculty in 1956 and continued to teach there until 1989. While at UNC, he developed one of the first techniques to detect pesticides in water, mentored scores of graduate students and helped to develop several of the Triangle (N.C.) area water supplies, including Jordan Lake.

Weiss was well partnered with his wife Shirley, whom he married in 1942. The two shared interests in academic pursuits, music, travel and the cultural life of cities. The work of Shirley Friedlander Weiss, whose academic expertise was in urban planning, took them to six of the seven continents and countless cities around the world. Shirley Weiss, professor emerita of city and regional planning at UNC, died in 2010.

Together, the Weisses supported 15 funds across campus, including for the Ackland Museum, the Sonja Haynes Stone Center for Black Culture and History, and UNC Libraries. They also established the Weiss Urban Livability Fellowship, an interdisciplinary graduate fellowship within The Graduate School that provides funding and an interdisciplinary environment in which new students can engage with issues related to urban living. In 1992, they established the Charles M. and Shirley F. Weiss Endowment for Environmental Sciences and Engineering to support fellowships for graduate students in the department.

“Dr. Weiss truly created a lasting legacy of investing in students and giving them the opportunity to improve the quality of life in communities around North Carolina and the world,” said Barbara J. Turpin, PhD, professor and chair of the environmental sciences and engineering department. “This year’s Weiss Scholars are addressing important problems, such as characterization of wildfire emissions, effects of environmental exposures on the microbiome and exposure mapping. They continue his legacy by being at the forefront of sustainable, positive change in environmental research and policy.”

A memorial service will be held on January 27 at 2 p.m. at Carol Woods Retirement Community.

The above content was produced by the Gillings School of Global Public Health communications team.

Remembering the life of Dr. Charles Weiss: The obituary for Dr. Weiss was published in The News & Observer on January 7, 2019.

“Charles Weiss, together with his wife Shirley, envisioned the interdisciplinary Weiss Urban Livability Program long before ‘interdisciplinary’ was a buzzword. The program, now in its second quarter century, has been instrumental in the education of more than 200 students who have gone on to careers as city managers, public health doctors, community development leaders, transportation planners, social workers and teachers. The Weiss legacy will live on in this innovative interdisciplinary program that is as important today as it was when it was created.”
—Steve Matson, Dean of The Graduate School 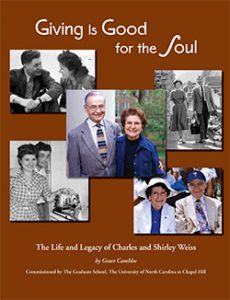 Giving Is Good for the Soul: The Life and Legacy of Charles and Shirley Weiss

To honor the 20th anniversary of the Weiss Urban Livability Program, The Graduate School commissioned a biography to share the story of the Weisses’s remarkable journey together. The biography, published in 2012, explores their intellectual interests, professional and personal achievements, world travels and philanthropy, as well as the Weiss Urban Livability Program’s many contributions to graduate student success and to meaningful research.