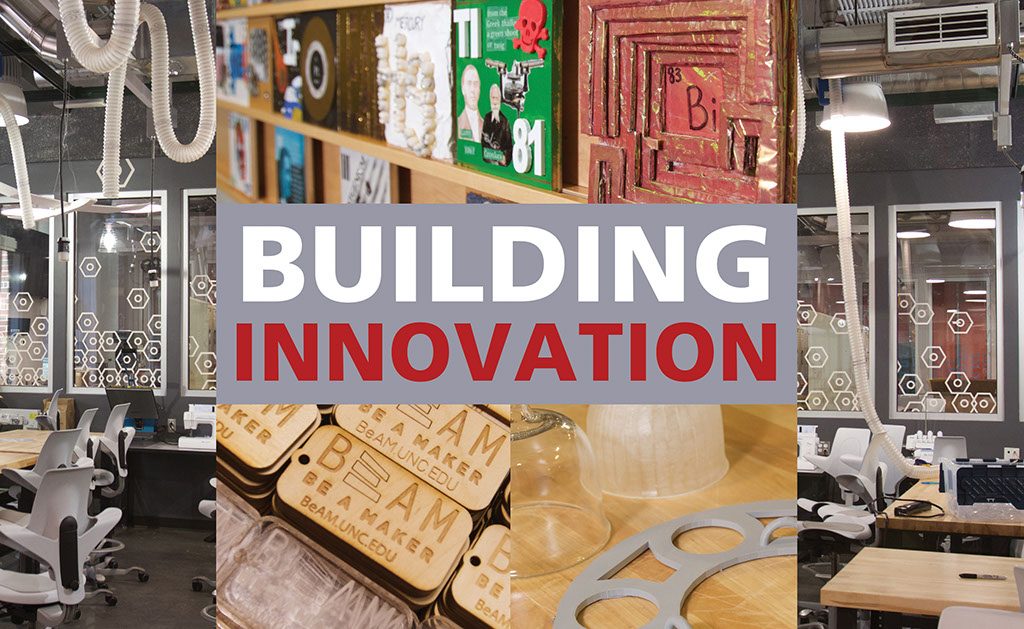 Whether they are creating 3-D models of tumors, printing wearable technology, or reconstructing history, University of North Carolina at Chapel Hill graduate students are bringing unique research projects to life.

The BeAM makerspaces are open to all students, staff and faculty, but there are some specific things BeAM Director Richard Superfine hopes the spaces accomplish for graduate students.

Their creativity and innovative new campus makerspaces are making these and other projects possible.

Richard Superfine, Ph.D., Taylor-Williams Distinguished Professor in the Department of Physics and Astronomy, directs the Be A Maker (BeAM) network at UNC-Chapel Hill. There are currently three makerspace sites on campus: in Murray Hall, in the Hanes Art Center and in Kenan Science Library. The spaces include tools such as drill presses, laser cutters, sewing machines and 3-D printers. All makerspaces are available to faculty, staff and students.

Superfine says the creation of physical objects is often part of conceptualizing ideas. He adds that the most powerful aspect of BeAM is that it creates and empowers a community of makers on campus. “By coming to the space, you are going to meet makers from across the campus—who are in other disciplines, who bring other expertise.”

This collaborative approach to problems will have a deep impact on the execution of science and research, Superfine says.

The system uses cells suspended across porous sheets of paper to form a tissue-like construct that resembles and acts like a tumor, he says. Boyce says the lab wouldn’t have attempted integrating fluidic devices and paper cultures without access to the BeAM network.

“That’s the beauty of having a makerspace, because it really opens up new avenues of research that were previously closed off due to a lack of available tools,” Boyce says.

Before he learned about the makerspaces, Boyce focused most of his research on using resources and systems that were already available to him. Now, he’s more adventurous with his research. “It’s empowering to have an outlet that I can use throughout my education at UNC to build whatever I need, whenever I need it,” Boyce says.

Kimberly English, a first-year master of fine arts student, uses the makerspaces to research textiles that connect technology to wearable items. These smart textiles, she says, include garments that respond to the wearer or the environment.

English says her work at the makerspaces has allowed her to be creative in a way that is different from weaving, knitting or embroidering.

“It’s been kind of a magical experience working with the 3-D printers—thinking up an object, modeling it, and then in a few hours holding it in your hand,” English says. “That’s been my favorite part, feeling like almost anything is possible to create.”

Brad Erickson, a fourth-year doctoral student in religious studies, is using the BeAM sites to bring history to life.

Erickson is an archeologist and his research deals with the creation of virtual ancient spaces. “In the summers I work on excavations in Israel, and I am always thinking of ways we can better visualize the past.”

Recently, he’s been creating 3-D visualizations of ancient synagogues within virtual environments. This way, someone can wear a virtual reality headset and experience some of the ancient world through its architecture. Erickson has been using the 3-D printer to print a series of ancient oil lamps, with the hope of having full glass replicas made, in order to understand the lighting in an ancient synagogue.

“Before I became involved with the makerspaces on campus, I had no experience with emerging consumer technologies such as 3-D printing and laser scanning,” Erickson says. “Every single person I have come in contact with through the makerspaces has enriched my education and further connected me with a hybridized world of humanities and technology.”